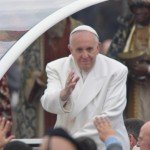 The Greatest Sell-Out This document is unabridged courtesy Brother Bill Steven Ben-Nun: Shalom Chavrim. My name is Steven Ben-Nun. You're watching Israeli News live. It's been nearly six years ago, March 13th, 2013 after the announcement of Jorge Bergoglio, the Argentine cardinal who was elected to become the pope of Rome, the next pope of Rome. Pope Benedict who had … END_OF_DOCUMENT_TOKEN_TO_BE_REPLACED

March 30th 2019 the Coming Persecution Conference will take you on a one day journey that you will never forget. Speakers: Jana Bennun, Dr Stephen Pidgeon and Steven Ben-Nun will each speak on subjects that are paramount to the times we are living in. Don't be blindsided by what is really coming! We have been unable to set up a ticketing system this time around so we have … END_OF_DOCUMENT_TOKEN_TO_BE_REPLACED