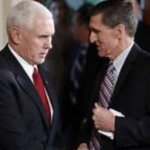 Simon Parkes in a video produced on his Youtube channel said that General Flynn may replace Pence as Vice President. Mr. Parkes made it clear this was not set in stone but the mere fact that this subject was brought up in January 10, 2021 video was shocking. First off most people would say that Joe Biden is President-Elect and that President Trump has conceded the election so … END_OF_DOCUMENT_TOKEN_TO_BE_REPLACED