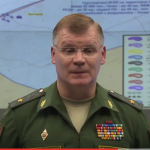 According to Igor Morozov a member of Russia's foreign affairs committee has stated "in Syria and there are other air defense systems, which will allow to cool some hot heads and create a no-fly zone over the country, if necessary." this was reported by Descred.ru on today October 6,2016. But Mr. Morozov's words come with some considerable weight by General Koashenkov … END_OF_DOCUMENT_TOKEN_TO_BE_REPLACED