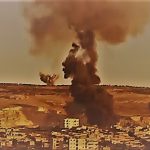 Damascus had vowed to protect the Kurds if Erdogan launched an air attack against the Kurdish Minority in the Northern Province the city of Afrin near the Turkish border. Erdogan held to his promise to launch the attack but President Assad did not try to stop the war planes from attacking the city as his government had threaten to do. Scores of civilians were injured or … END_OF_DOCUMENT_TOKEN_TO_BE_REPLACED