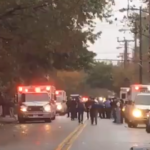 Police are on the scene in Pittsburgh Pennsylvania, police have warned, for people to stay away from the area because the situation is still active. Early reports heard on Police Scanners was the shooter shouting "all Jews must die".  The synagogue in Pennsylvania was called the Tree of Life. According to CBS 8 people are confirmed dead. CNN reporting 12 shot 4 confirmed dead. … END_OF_DOCUMENT_TOKEN_TO_BE_REPLACED