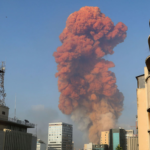 Israeli News Live was suspended from Youtube for false pretense. In our Live Broadcast entitled: "Beirut - Message Sent", we were removed because of the accuracy of the information that proved Israel was behind the attack on Beirut and it was not due to an accident caused by the Lebanese government. Israeli News Live had received information 10 days before the incident in … END_OF_DOCUMENT_TOKEN_TO_BE_REPLACED