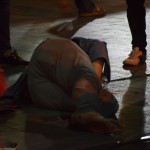 It is still not clear by Israeli Police if the stabbing of a Jewish man was an act of terrorism or part of a late night bar fight.  I was actually close to the scene where the incident occurred and was able to photograph the victum but was not aware at the time what had occurred. We watched as the man was carried out by two other Jewish men, his fate dragging the ground. At … END_OF_DOCUMENT_TOKEN_TO_BE_REPLACED