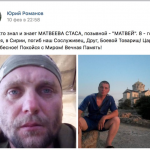 Israeli News Live covered the story of Russians being among the dead of a deadly US airstrike that included multiple aircraft, on February the 8th only hours after the incident occurred near Deir Ezor Syria. Pro Syrian fighters suffered the most casualties as high as 100 dead according to Pentagon statement that was released the following day by CBS News. What was interesting … END_OF_DOCUMENT_TOKEN_TO_BE_REPLACED