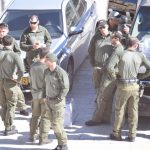 The IDF has announced via their Twitter Feed that last night was one of the largest operations for the year of 2016. The Israeli Forces conducted major raids shutting down arms and illegal weapons factories inside Judea and Samaria. Tensions are on a sharp rise with the recent attacks by Hamas in southern  Israel. And Israel has responded with counter Airstrikes on terrorist … END_OF_DOCUMENT_TOKEN_TO_BE_REPLACED